Keep up to date with Protomax Plastics latest Twitter feed. 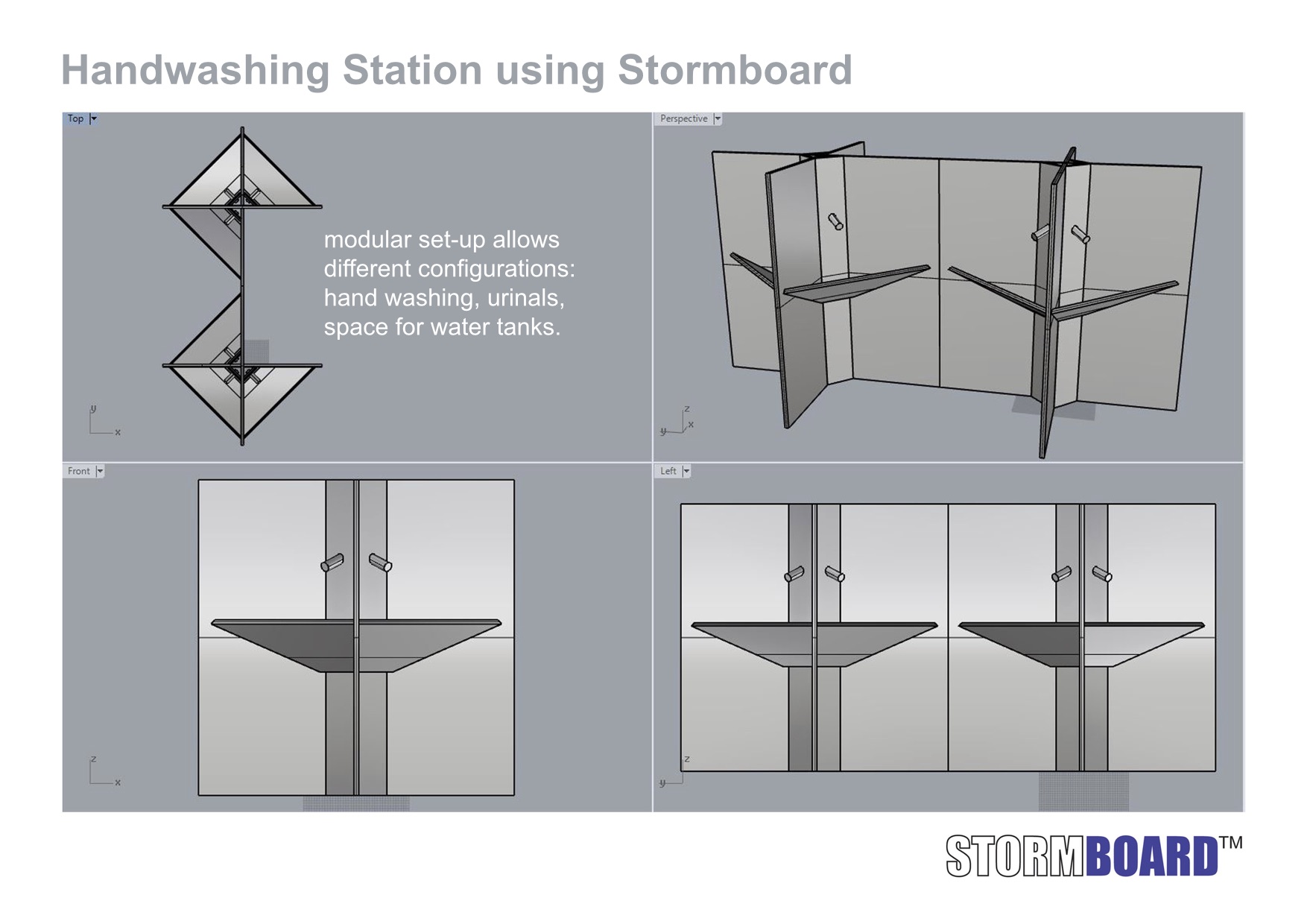 Protomax are now building the first mobile Storm Board production facility, aimed at producing boards locally for the construction of shelters and sanitary stations. 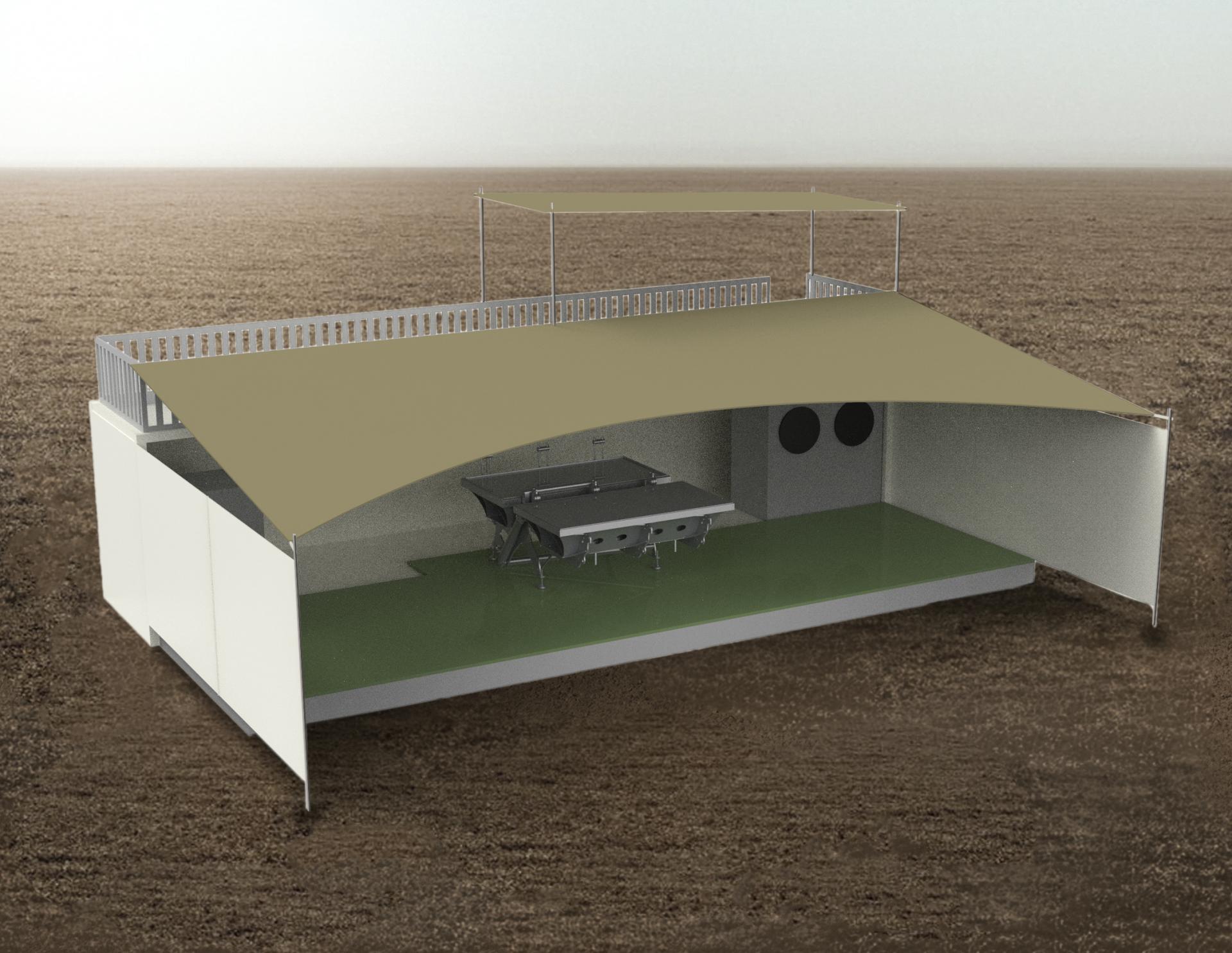 It was never our intention to become experts in shelter building, we just invented the process that made it possible. In 2010 a magnitude 7 earthquake hit Haiti destroying buildings, infrastructure and displacing families. The pictures relayed back to the UK illustrated the plight of the local people, and also showed large amounts of waste plastic lying around. At the same time we had just finished building our first full size Protomax machine, which would make boards for construction from mixed waste plastic to replace plywood.

Every boy scout learns that you need Shelter, Water & Food, in that order, to survive in harsh environments. The first step in disaster relief is to ensure the supply of quick build shelters, which generally take the form of tents and plastic sheeting or versions thereof. These offer shelter from the elements, but little insulation or security and are intended only as an interim measure. The question is what happens next? The disaster area will need rebuilding, sanitation needs installing and jobs need creating. In 2016 62,00 people were still displaced in Haiti. Cholera had hit the camps, then in 2018 an earthquake of magnitude 5.9 hit Haiti.

The UNHCR claims that 68.5 million people around the globe have been forcibly displaced, of whom 25.4 million are refugees. Refugees spend between 7 and 17 years in refugee camps.  We thought it was time to think beyond tents and immediate disaster relief. The crisis areas tend to lack finance, raw materials and tools. Generally, there is little wood, metal or concrete. Our concept was to build homes and infrastructure using the abundant waste plastic available in the environment. If they would ever run out, we were sure that there would be plenty of countries happy to sell their low value waste plastics.

This would create jobs for pickers in collecting plastics, pre-processing such as shredding and granulating, then board making, and fabricating those boards into anything from shelters, tables, wash stations and toilets. Beyond jobs, shelters and rebuilding the biggest objective was to give those affected by a disaster hope. The problem was that no one had ever done this successfully, and big industry in Europe was not interested, as they already have plywood. We would have to prove the product, the technology and then design and build the shelters. It was going to be a long road trip.

To cut a long story short we did it, we set up a Storm Board plant in the UK and now our boards are used as everything from festival toilets, cabins, animal husbandry, site hoardings to the shop windows of Knightsbridge. So now it was time to build a factory in a container and send it where it’s needed. 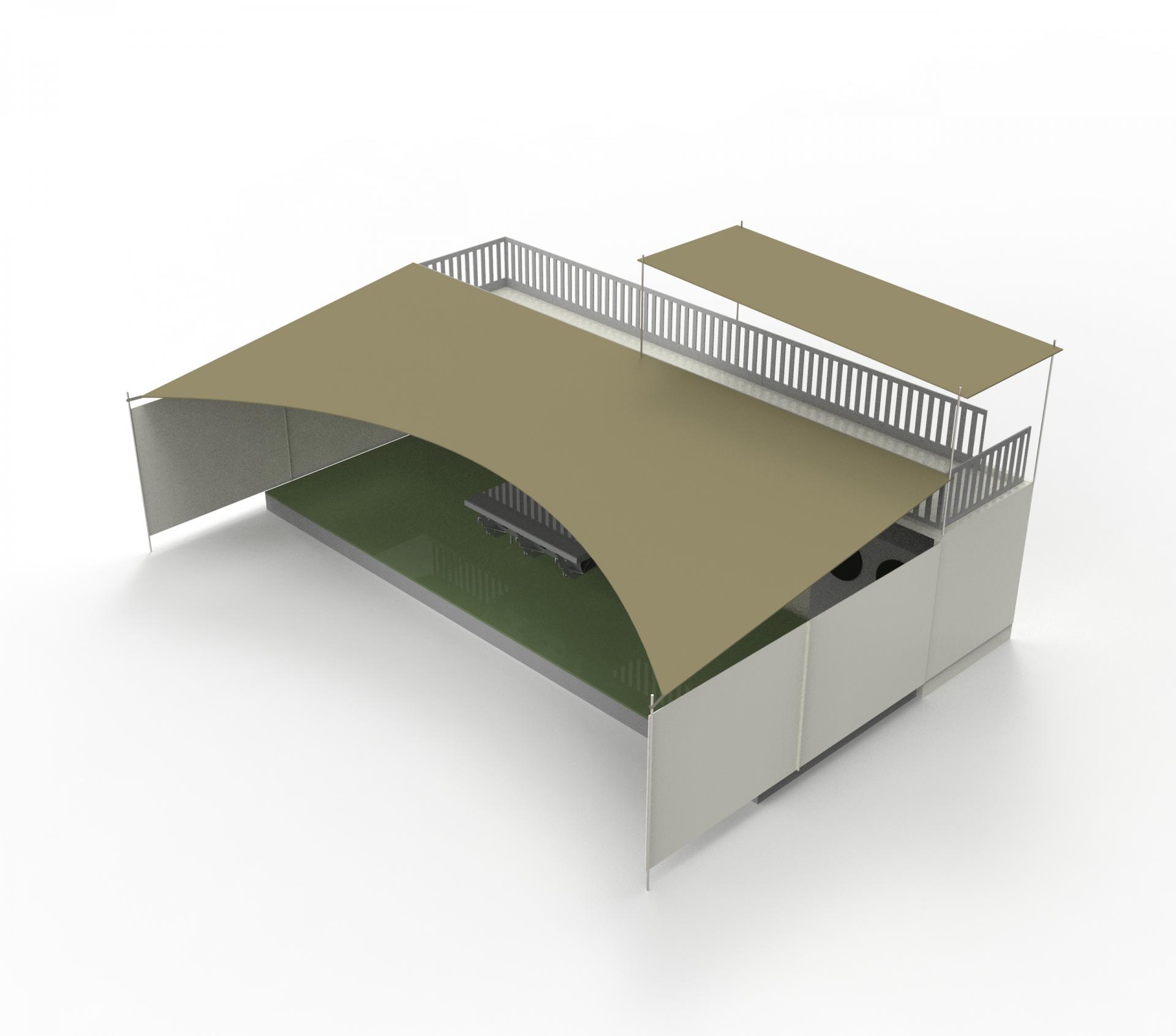 The mobile production unit will produce 8ft x 4ft Storm Board from plastic waste. These boards can then be fabricated locally into products needed. This could be the replacement of rotting plywood flooring, shelters and sanitary areas. Building hand washing stations will help in the prevention of transmission of diseases such as Covid-19 and diahorreal diseases.

The mobile production unit will supply building materials and clean up the environment at the same time. The NGO’s are probably going to stick with the supply of PVC tents.

We’ll update the news page with photos as we build.

It's Milan Design Week and the Salone del Mobile is in full swing, so the chips are down, who can come up with the most original sustainable installation? Recycling Association Corepla and brilliant architect and designer Rossana Orlandi decide to highlight the plastic waste problem and take it a step further - they offer a solution, upcycling the mixed waste plastics into usable materials.

Corepla fished mixed plastic waste form the River Po, along with post consumer plastic and sent it to Storm Board. We created boards from the waste that replace plywood and mdf commonly used in exhibitions and intallations. With all the advantages of a tough waterproof board Corepla's installation turned an emergency shelter into a Milanese style work of art. Thousands of loacals and visitors to the Via Solferino will wallk through the Storm Board arches this week.

Rossana's team set the boards up in the National Science Museum where it is part of the Guiltless Plastic display. A celebration of designers ideas for the use of waste plastic.

How it was done: you tube 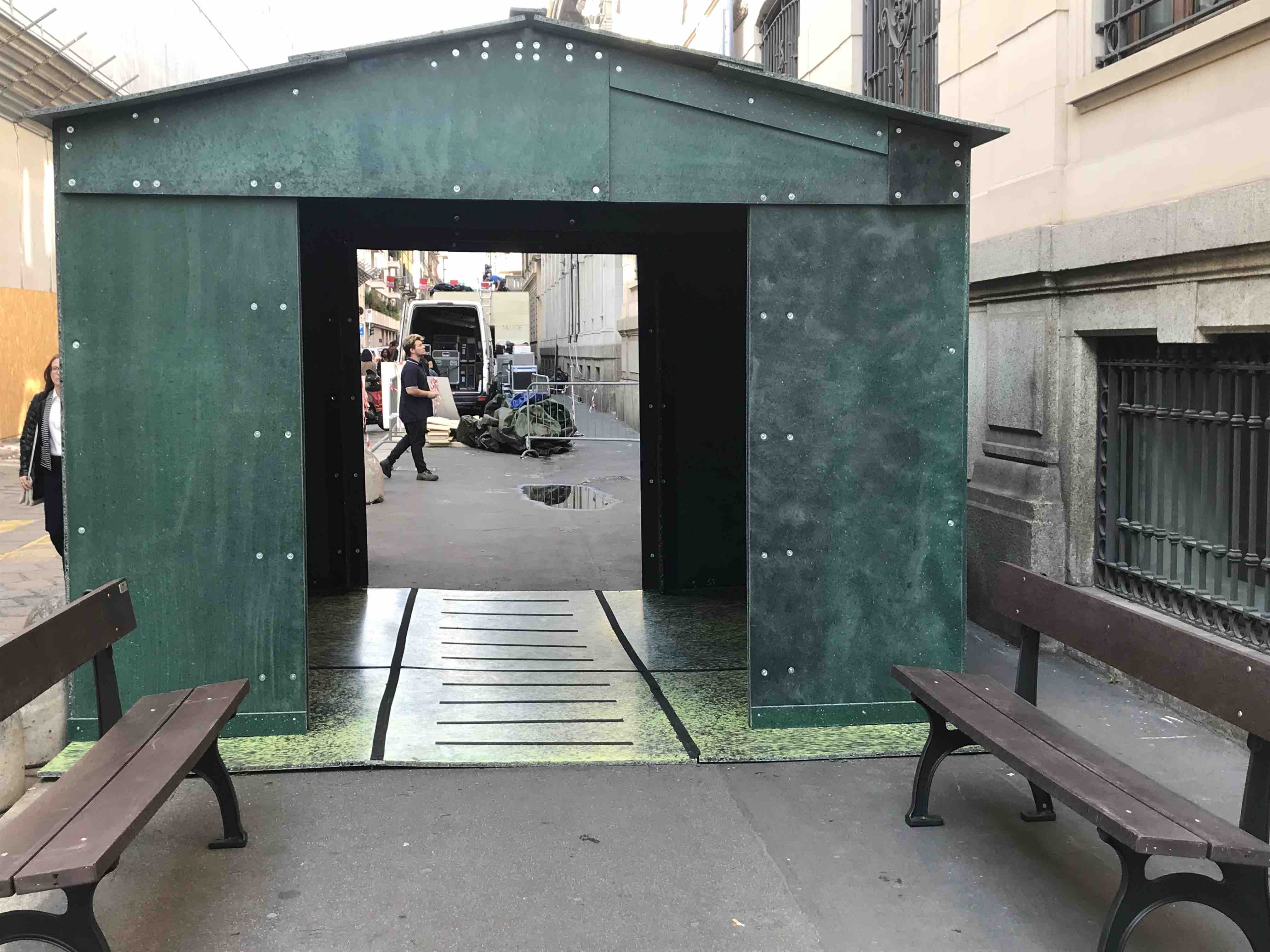 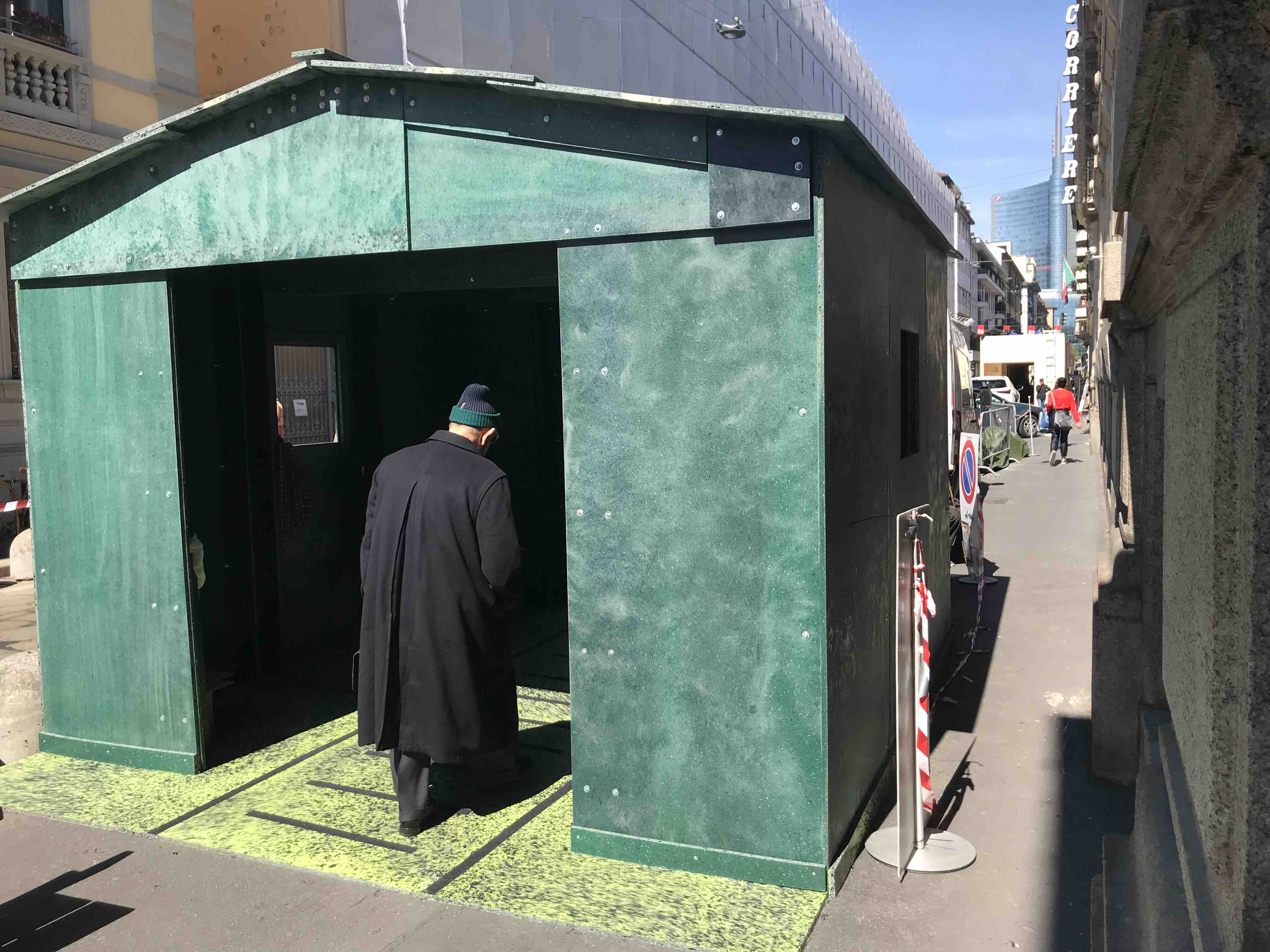 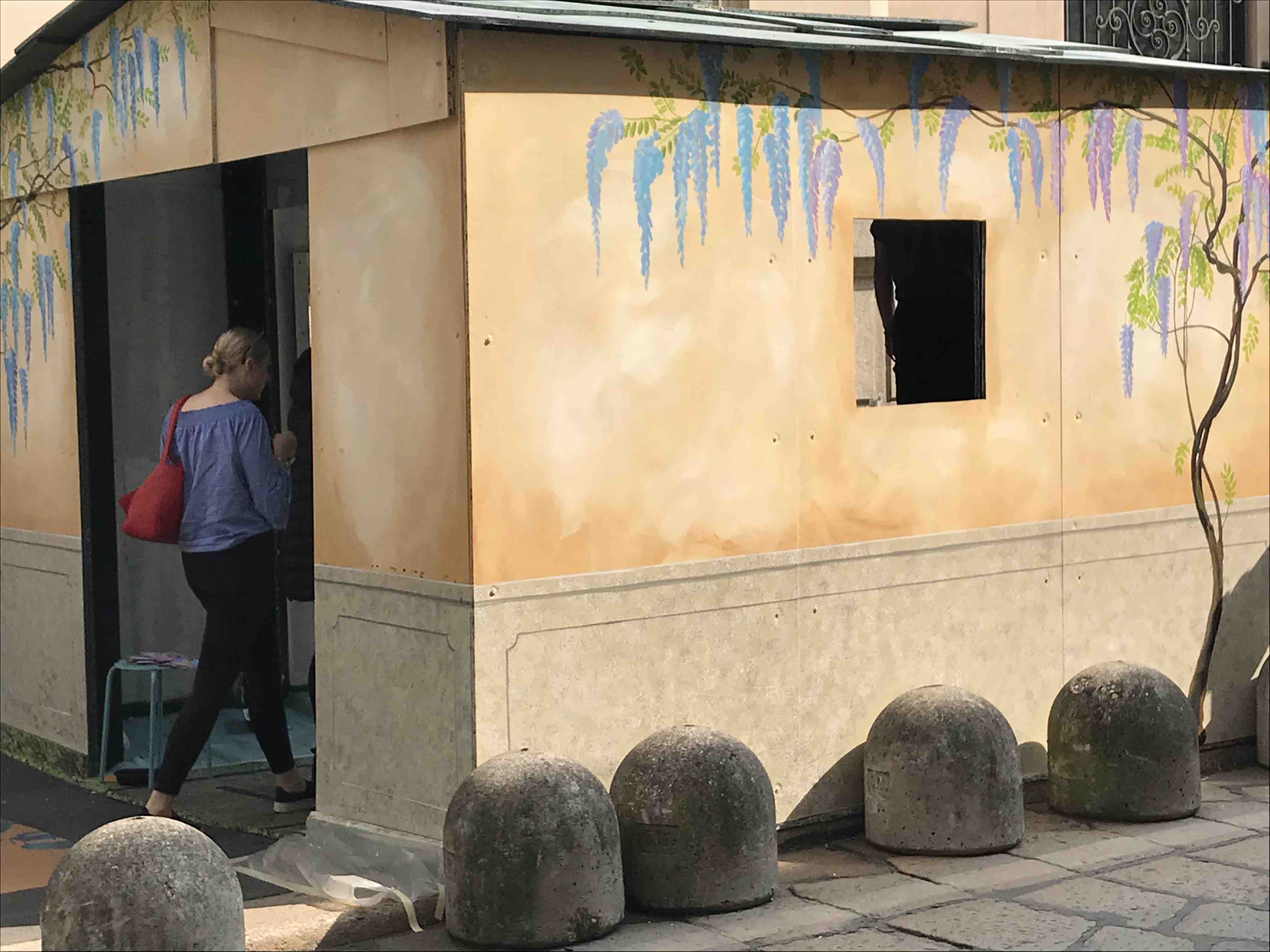 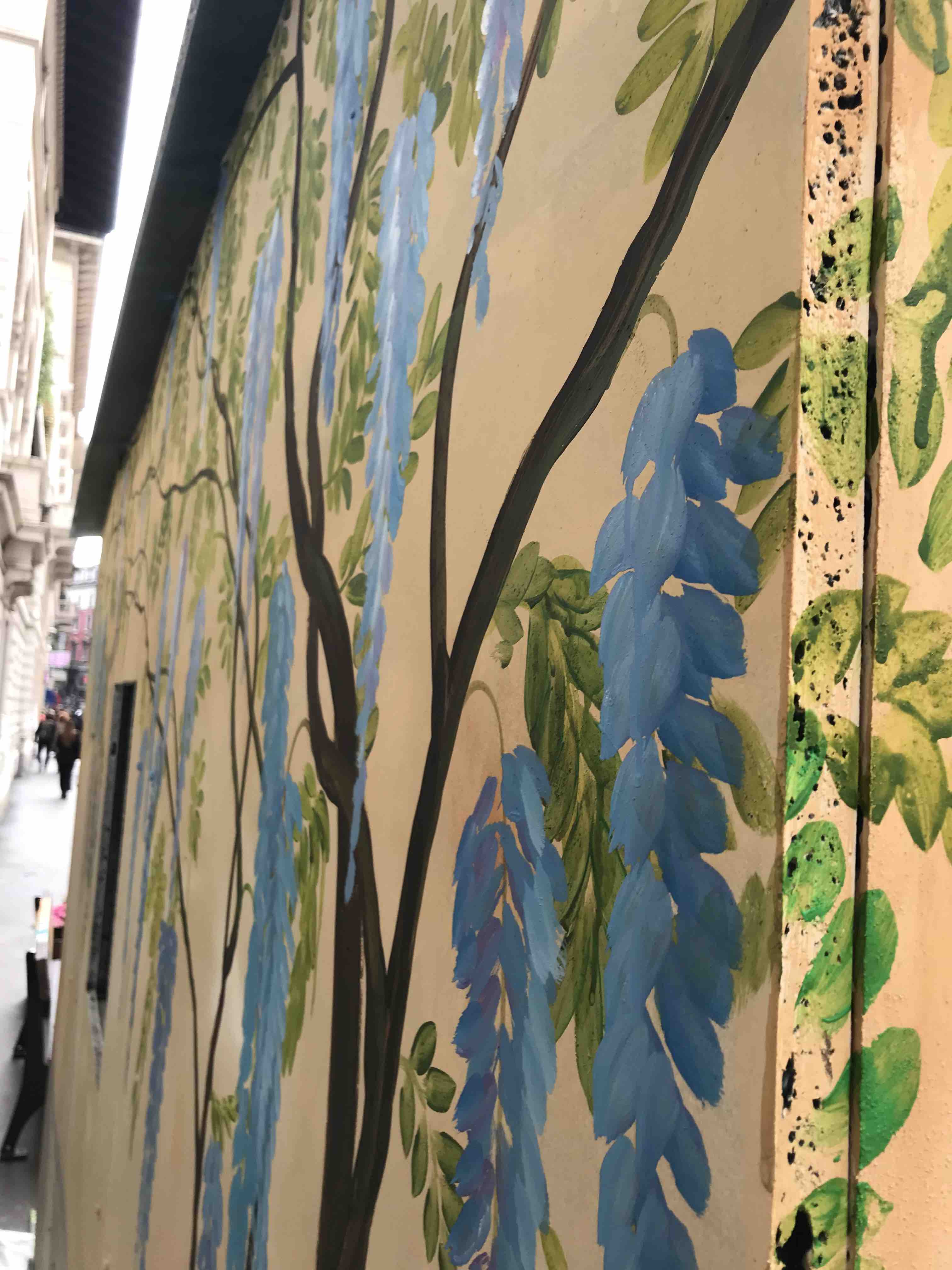 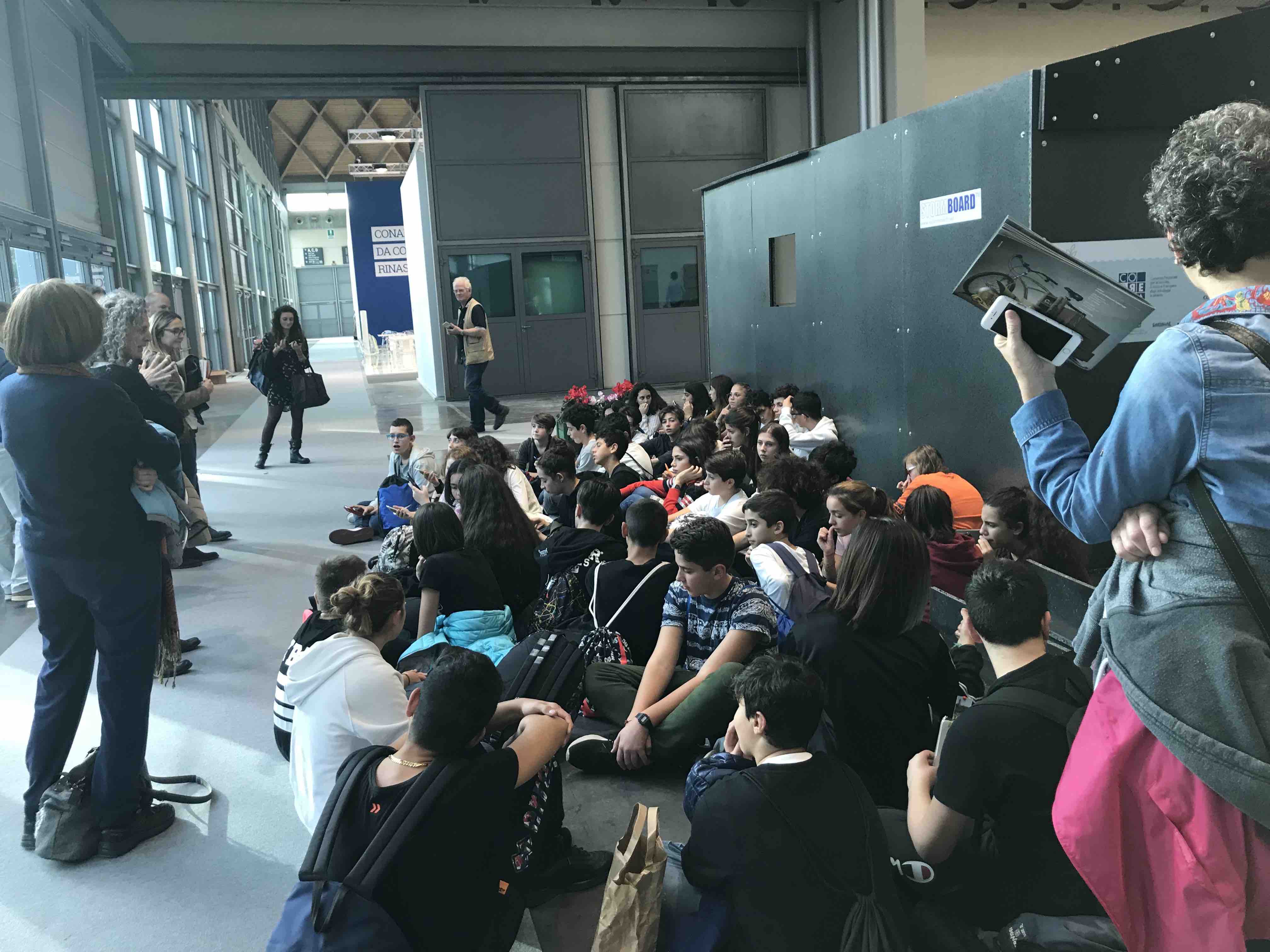 e-shelter a hit at ecomondo

All plastics can be recycled!

The Protomax shelter stole the show at Ecomondo in Rimini. Storm Board made from ocean waste and waste collected from the Po river was used to build this shelter.

The Italian Minister for the Environment, Mr Sergi Costa, inspected the shelter and having spoken to Nico Stillwell, congratulated him on the result. It’s amazing to think that the plastic waste floating on the river Po has now been made into a house. 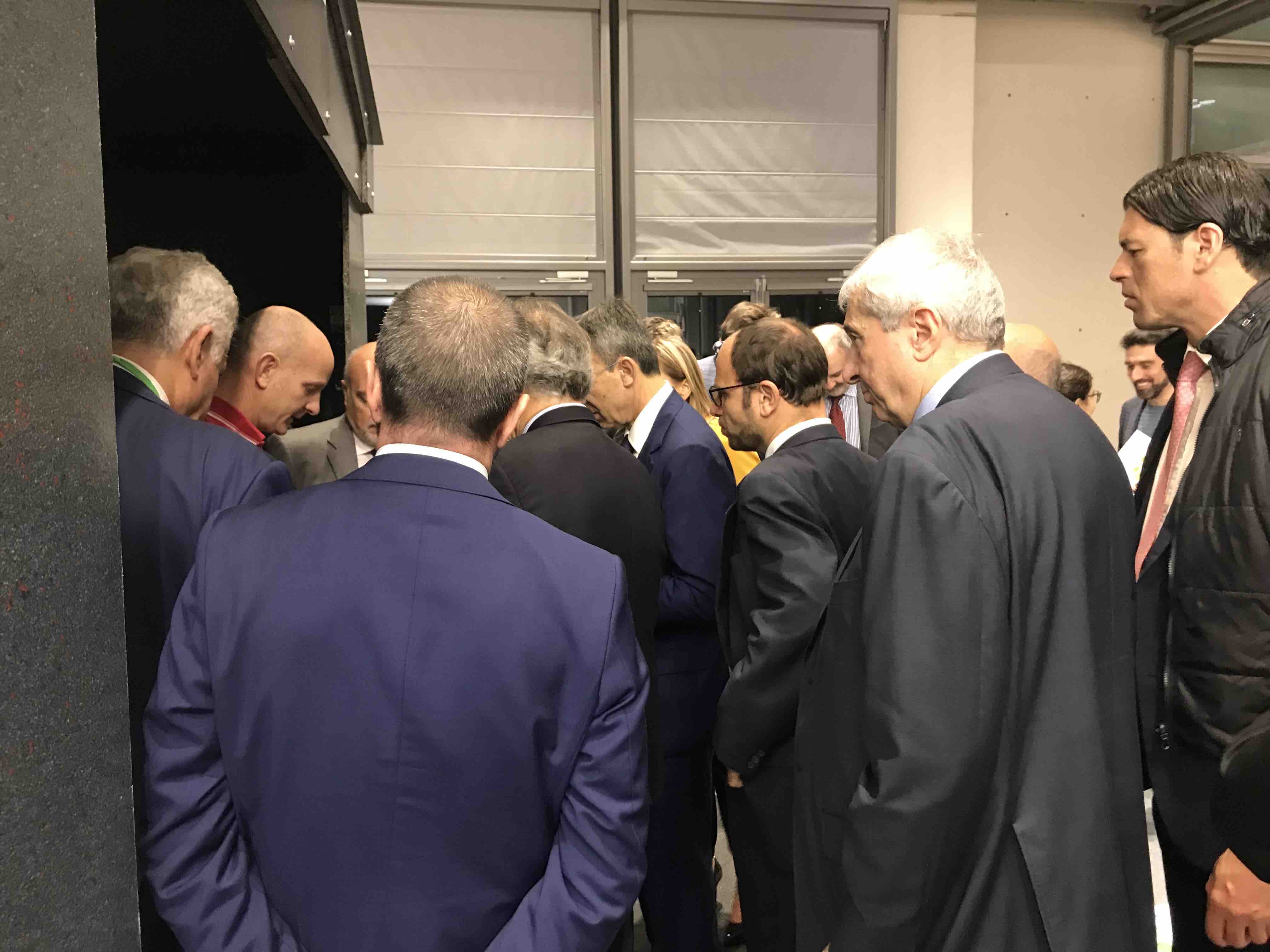 WFO organised the collection of waste in Italy with Corepla, the Italian recycling association. Storm Board used the Protomax technology to produce the panels used to build the shelter.

The e-shelter was designed by Anthony Battersby and Protomax to provide security and climatic protection for a family of 5 in an emergency situation as an alternative to tents.

The shelter is quick and easy to erect, but the key is that it can be made from local mixed waste plastic on site. This provides essential skills and jobs to the local community, while clearing up a much reported plastic waste issue.

Imagine if we could clear up the plastic polluted rivers, while providing material for local housing around the world…this is real recycling.

Protomax invented the P2 process to enable people to build structures from waste plastic, rather than cutting down trees. Often where wood, concrete and traditional building products are scarce there is an abundance of waste plastic that can be converted into houses.

Storm Board is a weatherproof board made from waste plastic. There is no need to paint/ plaster/ render or use expensive framework to build a shelter.

Protomax are building a shelter from Ocean Waste, collected by Waste Free Oceans,WFO , at the Circular Economy Show, Ecomondo, in Rimini from 6-9 November: ecomondo

Join Protomax and join the circular economy, use waste to help.... 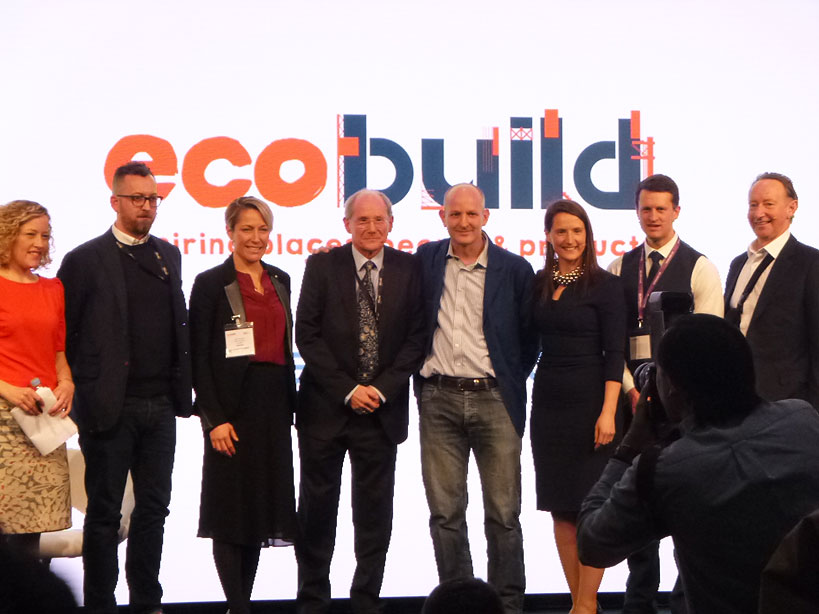 In a first for the competition, judges have chosen two winners in this year’s Ecobuild & M&S Big Innovation Pitch. From a shortlist of five finalists, the panel chose a joint entry from Arup and Airedale, and a second from Protomax Plastics as the winners at last night’s event (7th March 2017). Both will now go forward into discussions with M&S and have the opportunity to become one of their suppliers.

The first winning entry was from Arup and Airedale with the Artus Hybrid FCU, an innovative air conditioning product invented by Arup, and taken to market by Airedale, with a launch date of July 2017. It is the result of thinking about how we can do air-conditioning better; saving energy, money and space.

Joining them on the podium was Protomax Plastics with Storm Board™, a sustainable alternative to plywood produced from mixed waste plastics. Much plywood is used for temporary works such as hoardings and needs to be clad in costly PVC and paint before ending life in landfill.

Commenting on the decision to choose two winners, Imogen Cust, Engineering R&D Manager for Property, Development and Facilities Management at M&S, said: “The standard of entries was brilliant this year - so good we had to choose two. The winners stood out because they have used their industry knowledge and their passion to solve real life M&S challenges in two very different fields.”

Speaking after winning the Big Innovation Pitch, Nico Stillwell, Imagineer from Protomax Plastics said: “I didn’t expect to win at all. Our idea was so different because no one else was talking about recycling but it seems to have captured the imagination of M&S.”

Protomax's emergency shelter design, the 'e home' which can be used by refugees and victims of disaters such as floods and earthquakes, has been featured on BBC TV.

Using just our unique recycled plastic panels a 17m2 warm, dry and spacious shelter can be built in hours replacing the temporary tents currently used and get people safe in disaster-struck areas.

In the long term we hope to install our unique machinery producing these panels into relief areas turning their waste into homes and creating a thriving local economy. 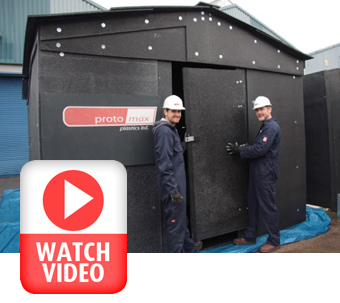 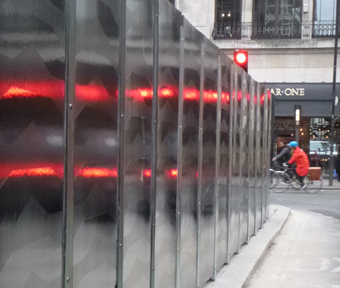 Our unique recycled plastic board has been chosen as the hoarding around the prestigious Centre Point construction site in central London. Contractors Brookfield Multiplex were looking for a new, more sustainable alternative to the usual chipboard. Our recycled plastic board is ideal as it is weatherproof, hardwearing and at end of life 100% recyclable into a new board.

Attracting more than 70,000 visitors over four days it was the perfect way to introduce people to our innovative technology and products.

Stormboard, our 100% recycled waste plastic board, is a credible alternative to plywood, chipboard and MDF, plus we announced at the show that Travis Perkins are now stocking the board! 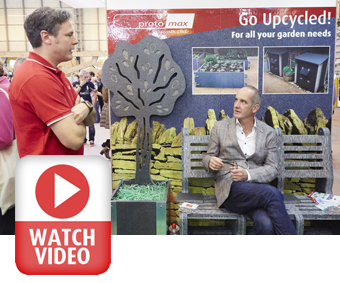 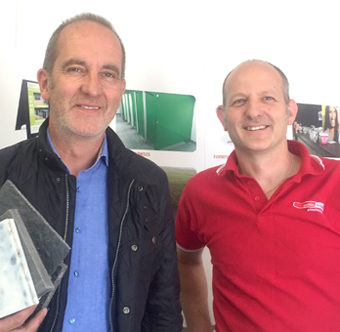 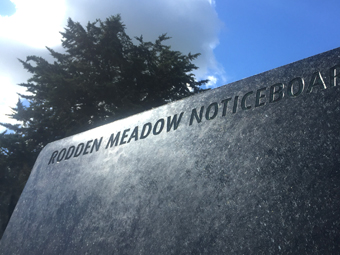 Sit up and take notice

Forward-thinking Frome Council in Somerset have just taken receipt of six new public notice boards made from Stormboard for their park spaces.

Ideal for outdoors, all weather use being made of recycled waste plastics. They also give almost no purchase for graffiti and can be easily wiped down.

Each year Kevin McCloud of Grand Designs fame, hand picks a selection of the best eco-innovations in the market place. Protomax are proud to have been selected and will be exhibiting on Kevin McCloud's Green Heroes platform at the heart of Grand Designs Live 2015. Dates are October 8th - 11th at Birmingham NEC, please visit us. 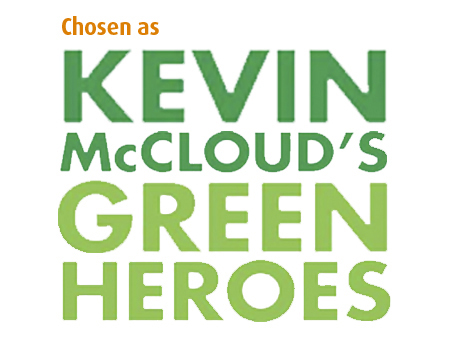 for those who dare to show wild recycled colours, splash boards are now available from: storm board 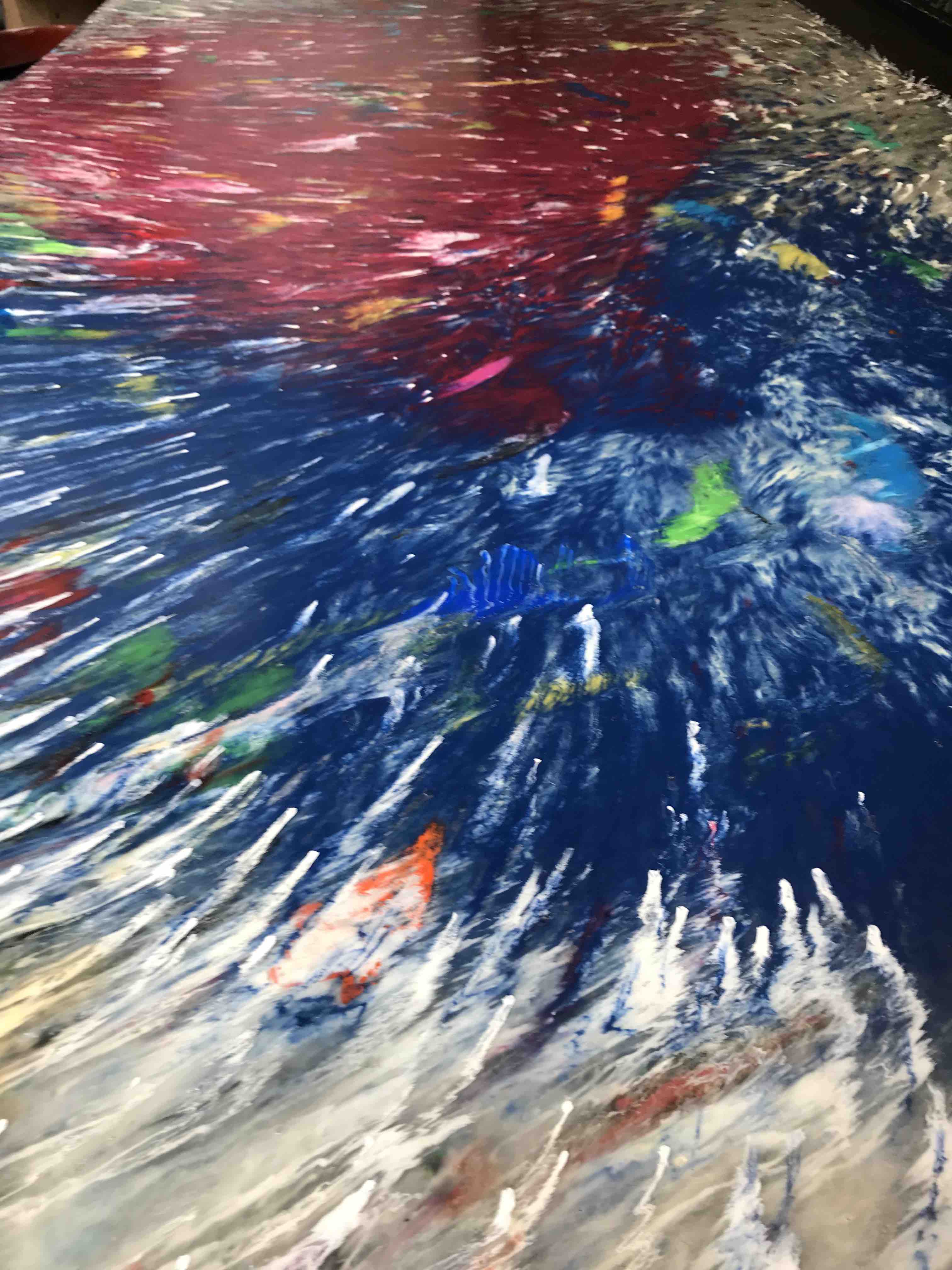 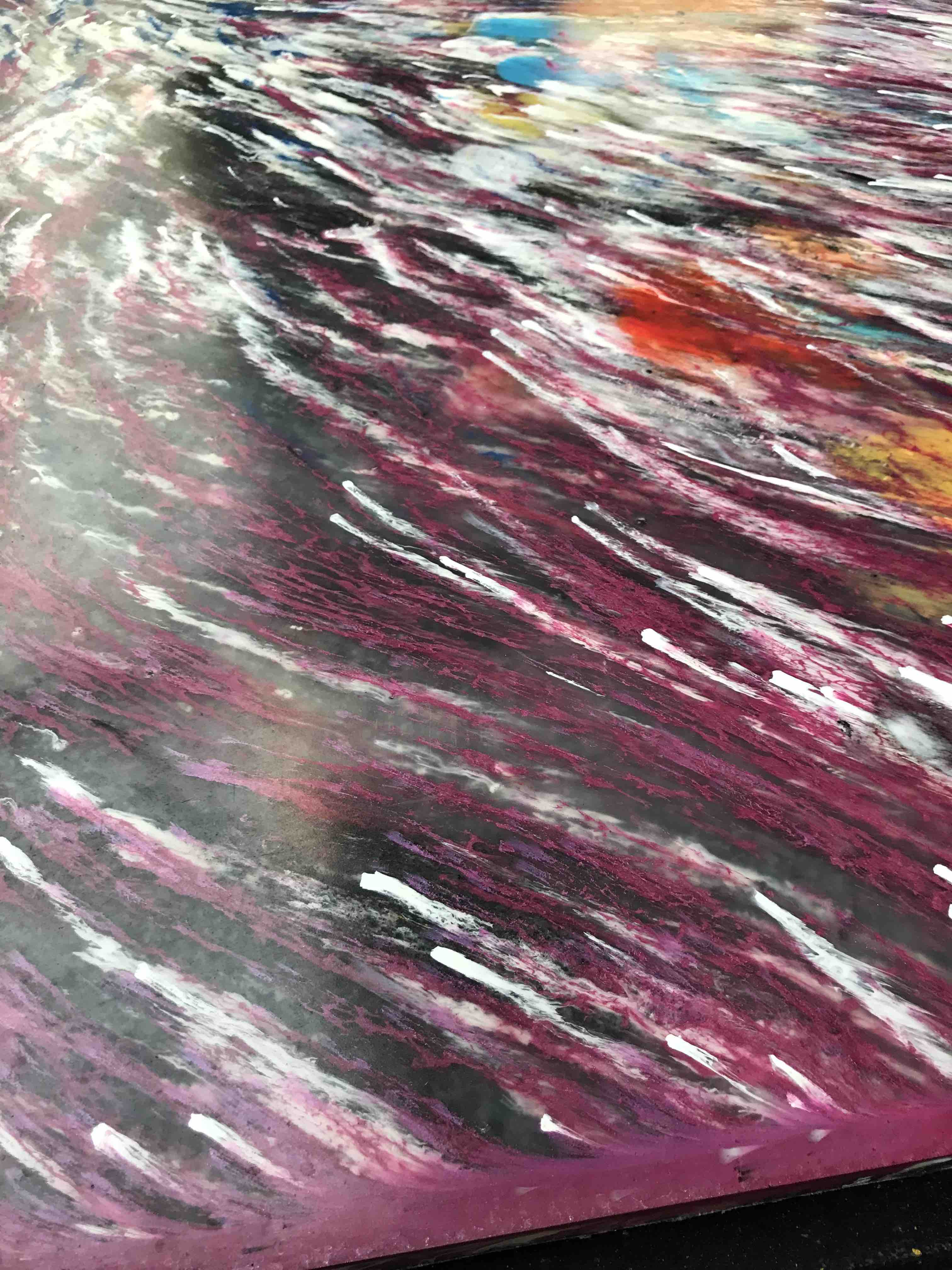 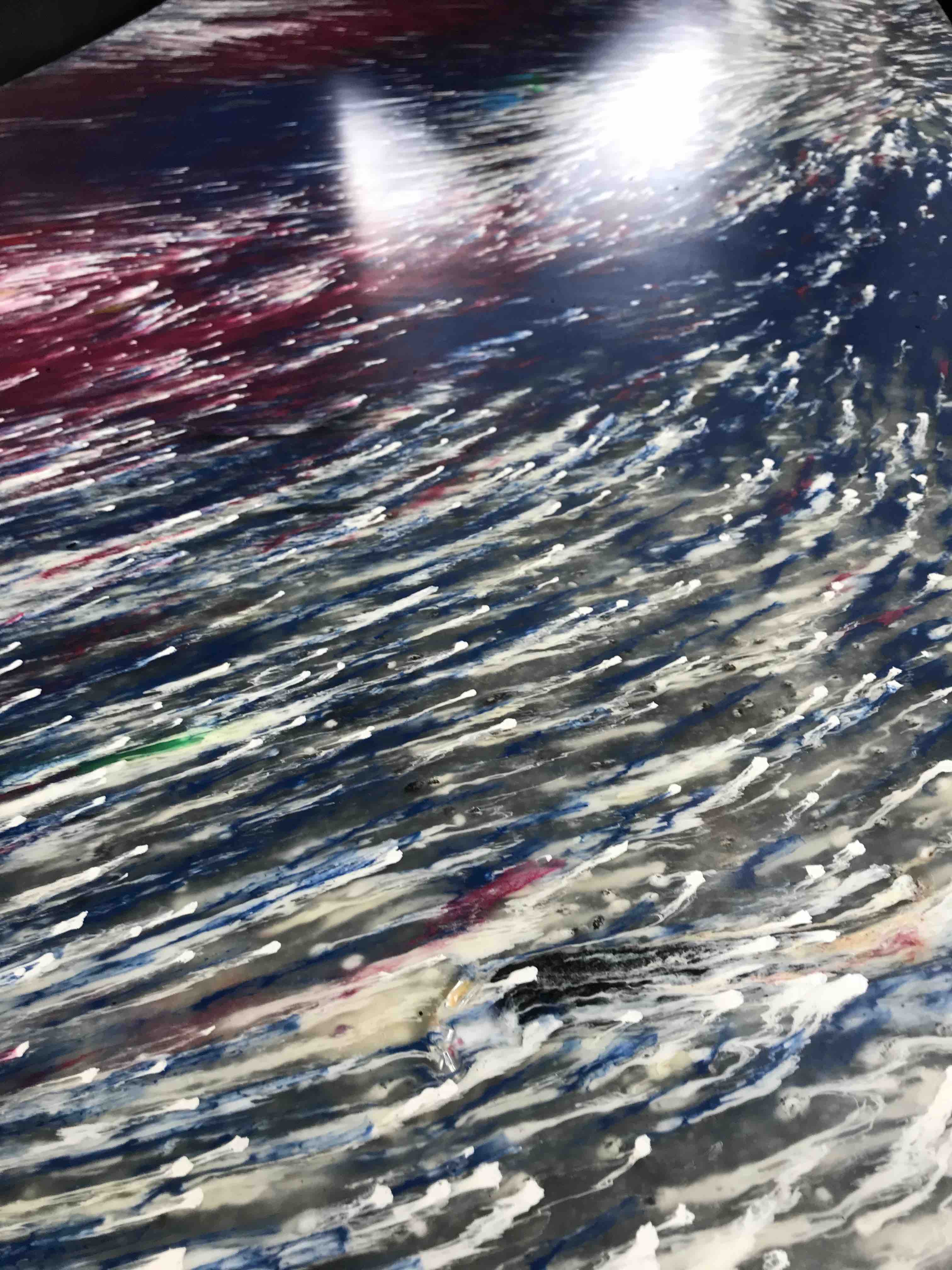